After helping Andy move north last weekend, I visited two sets of cousins, one in Washington and the other in Oregon. I had never visited either of them at home before, as they had always been generous to drive south to see me instead. For some reason, I never brought my camera out while I was visiting family, just for the scenery on this trip.Â Cathy walked me around the Capital Campus in Olympia, of which Washingtonains (?) take great pride in it being a full campus, rather than just a building.Â 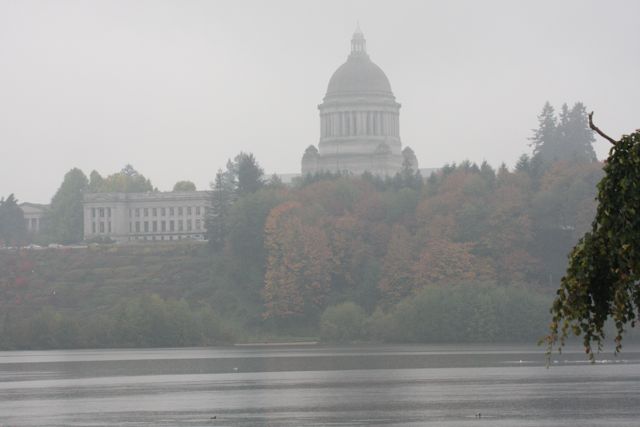 We then tried to see salmon jumping through fish ladders, but they were all lollygagalling around. Very lazy fish. Not even worth taking a picture of. I think they were waiting for the drizzle to stop, and the rain to begin.Â After lunch, I left and pulled into Corvallis a few hours later.Â

My cousin Pam and her daughter Katie made homemade pizzas, which were devoured by everyone there. Â After dinner, Katie,Â her brother Nick and I went to the local bar, where the eldest of Pam’s kids was working. He had arranged to work that night long before, when he had visited down south in summer. But, it was good to see them all, even for a short bit.The next morning, I helped Pam and her husband Joe search for a missing dog. I didn’t find the dog, but Joe did. After a quick break, I was back on the road south!

The owner and proprietor of this site. Feel free to message and say hello
View all posts by Bill →
This entry was posted in Family, General, Trips and tagged Family, Trips. Bookmark the permalink.

1 Response to Drizzle, driving and pizza.